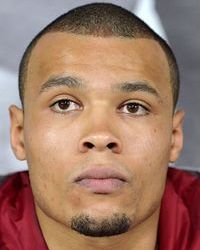 Eubank Jr is in the super middleweight division, he fights in the orthodox stance.